4 Important Things To Know About DUI Bail Bonds In Georgia 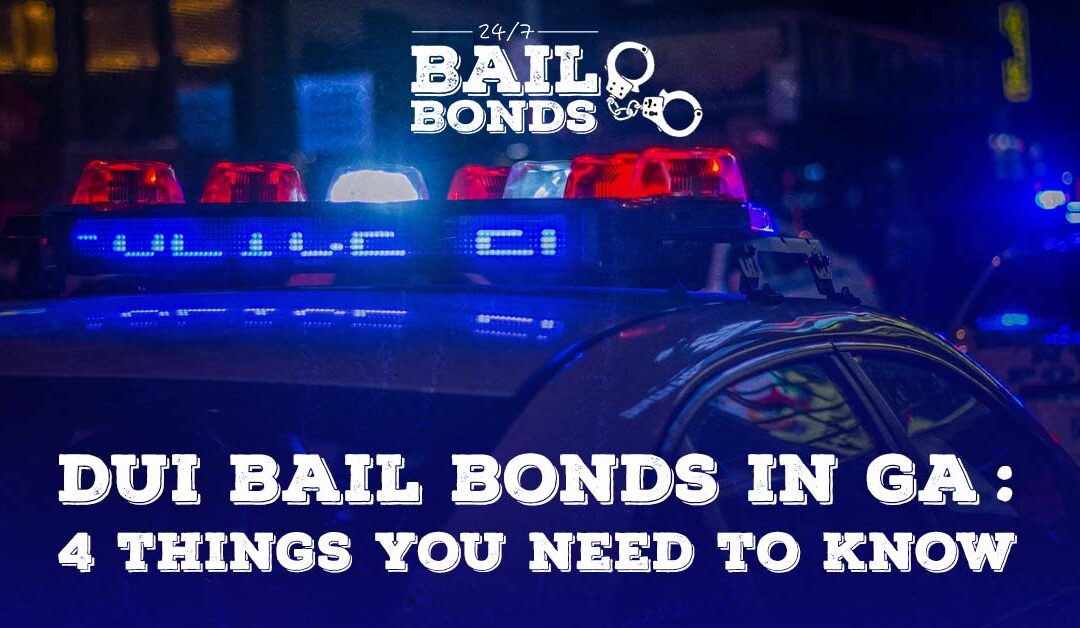 Sometimes, your loved one makes a reckless choice that results in jail time. When it comes to drunk driving, Georgia can have one of the strictest laws in the country. For those under 21, often there will be a no tolerance and license suspension. If you find a loved one needing assistance after driving under the influence, you may consider a bail bond to assist in posting bail

As with many criminal charges, the driving while intoxicated bonding amount often increases with every offense.

How Much Do DUI Bail Bonds Cost?

The cost of DUI bail bonds within Georgia can vary due to several factors. These factors can include where the arrest took place, what previous offenses the arrestee may have on record, what the blood alcohol level of the arrestee was at the time of arrest, and the arrestee’s age.

In Georgia, even if you have no previous DUI charges, you may be charged more if you have other charges on your record. The law in Georgia is also more brutal for those under 21 who are arrested for drunk driving, as often it will lead to immediate suspension of their license.

If the DUI is a felony or causes grievous harm or damage to others, the bail may increase, potentially as high as $10,000. A bondsman will charge a non-refundable premium anywhere from 12% to 15% of the bail, depending on the total amount.

How Much Is Bail For A First-Time DUI?

Assuming you are not under 21 at the time of your arrest and the DUI is considered a misdemeanor, you can expect a fine anywhere from $300 to $1,000 for your first-time offense. Depending on your blood alcohol level and prior criminal offenses, this may change.

However, if the judge finds other felonies before your DUI, you may be denied bail despite the charge being a technical first-time DUI. Other charges that are combined with the DUI charge can also increase the total fine amount.

How Much Is Bail For A 2nd DUI?

Suppose you have a previous DUI case in your criminal history. A second offense DUI/DWI bail bond might jump to anywhere between $600 to $1000. Usually, these will come with other charges, such as a $25 fee to post your photo and arrest in the newspaper if your conviction was within five years. Other potential punishments can include revocation of your license, mandatory DUI school, mandatory jail time, other fines and fees, and the forced seizure of all license plates registered in your name.

When Can You Get Someone Out Of Jail After A DUI Arrest?

In most cases, with DUI arrests, your loved one can expect to wait anywhere from eight to twelve hours before the jail allows them to be released, though in some cases, this can increase further. Many factors come into play when determining how long one has to be eligible to post bond and secure release from jail. Usually, this depends upon the judge in the county where the arrest occurs. Sometimes you may require a DUI attorney in cases where a judge has determined not to offer a bond to the arrestee.

How Can You Get Your Young Adult Child Out Of Jail For A DUI/DWI Charge?

If your child gets arrested for a DUI, you will need to pay the bail amount assigned by the court to secure release from jail. Bail is essentially a promise that the arrestee will return to court for every date without fail. If the arrestee misses just one day of court, the courts will issue a warrant for their arrest, and the bail will be forfeited. If they arrive for every court date as ordered, the court will return the bail money to whoever paid it.

What If You Don’t Have The Money For Bail To Get Someone Out Of Jail After A DUI Or DWI Arrest?

While first offenders may find their bail lower, repeat offenders can raise to astronomical rates. Sometimes you can’t pay the amount the judge has set for your loved one. In these cases, calling a bondsman is your best option.

The premium amount required varies, but a bail bond agency typically charges anywhere from 10% to 30% of the bail price. The bail bondsman will then cover the remaining bond, allowing your relative to be set free and return home. In these cases, you will not receive the premium back, as it is earned by the bondsman on the release of your loved one.

If you have further questions, 24/7’s helpful frequently asked questions page can answer them.

Our experienced, courteous bail bonds agents at 24/7 Bail Bonds are always available to help you and your loved ones secure immediate release from jail or detention centers. We are available 24 hours a day, seven days a week, including holidays. Call us if you need a bail bond in Bulloch, Bryan, Candler, Effingham, Evans, Jenkins, Montgomery, Toombs, Tattnall, or Wheeler County. You can also learn more about the bail process at our Bail FAQ page.